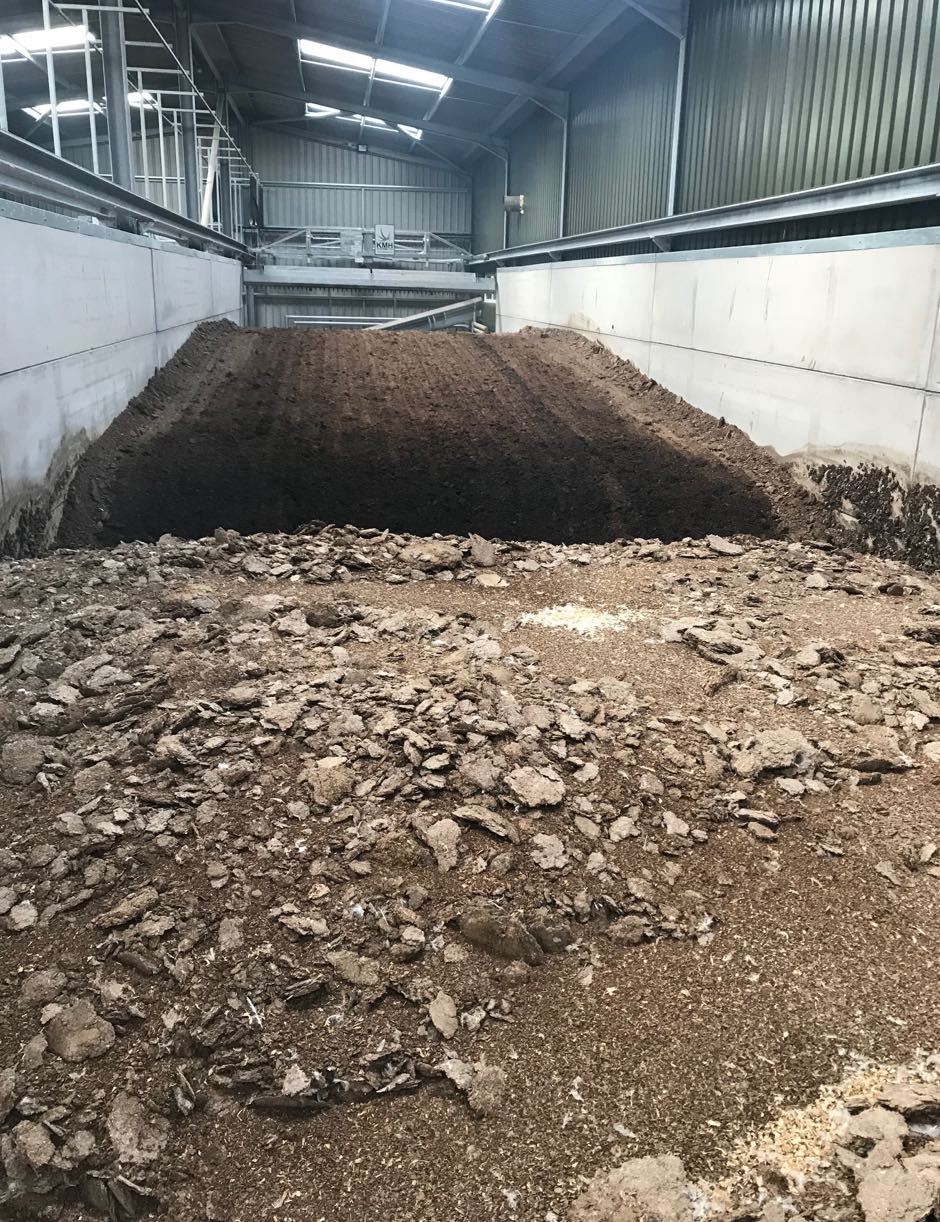 The site has 6 chicken sheds which houses 350,000 chickens at a time and the project not only provides heat and power it solves the issue of having to remove the chicken litter from site which further reduces business costs. Environ installed the following equipment to the farm: Uniconfort Global 90 Chicken litter Combustor Emissions Abatement Equipment Triogen ORC Combined Heat and Power unit and associated clean air heat exchanger KMH Top-Loaders litter feed system.

The Arora Group operate a number of hotels and recently replaced an old gas fired CHP unit at the Heathrow Sofitel with 2 new CHP gensets. The high base load of heating and power for hotels makes them ideal for gas fired CHP installations.

The project has delivered immediate benefits in operating costs for the hotel as well as improving the energy efficiency and carbon footprint of the site.

Environ provided a turnkey project including the removal of the existing unit and the delivery and installation of the new CHP engines on the roof.

After carrying out a comprehensive feasibility study and survey, Environ selected 2 smaller engines, replacing one larger one and completed the packaging of the CHP gensets at our engineering facility.  We also carried out the full installation and integration with the hotel’s heating and power distribution networks.  The installation of 2 engines also improves the availability of the energy to the site as one engine can be off-line for servicing while the other maintains full output. 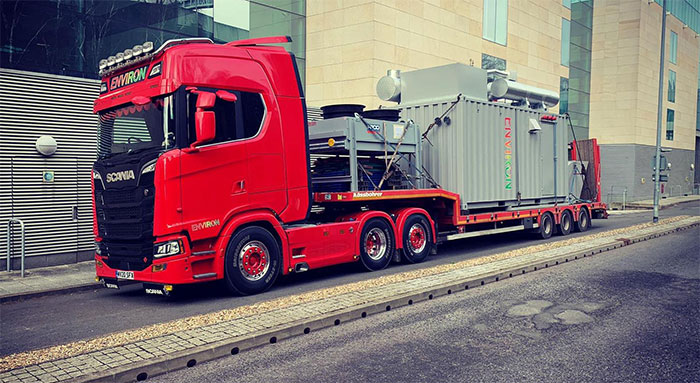 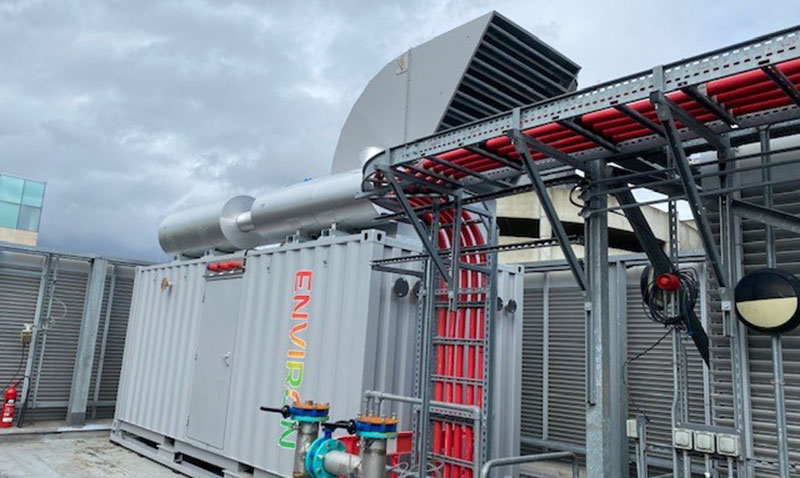 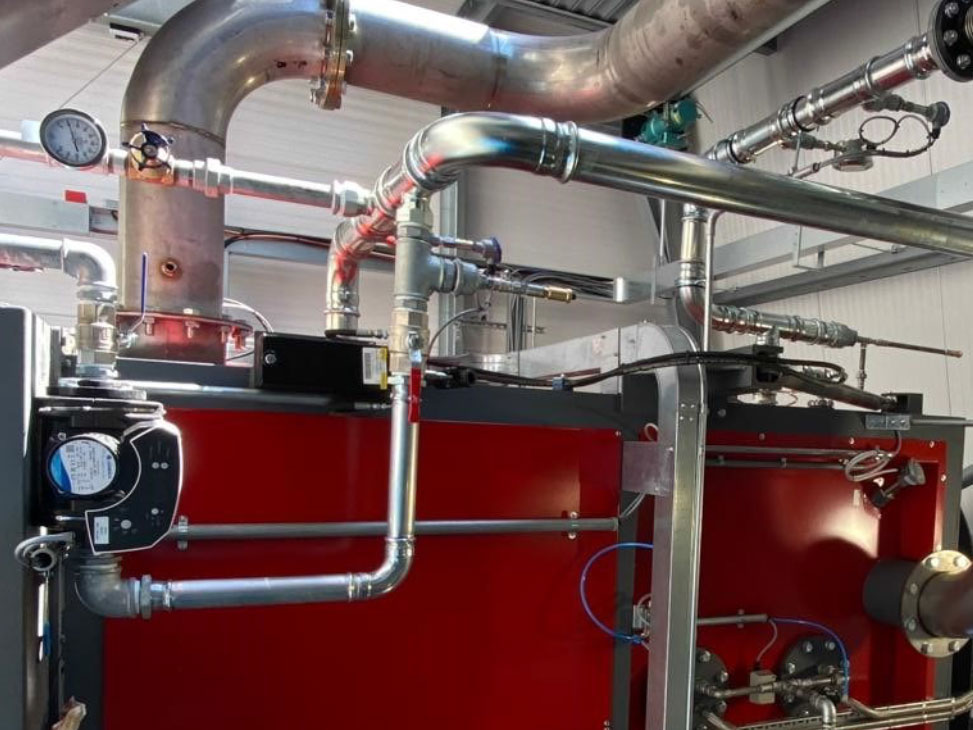 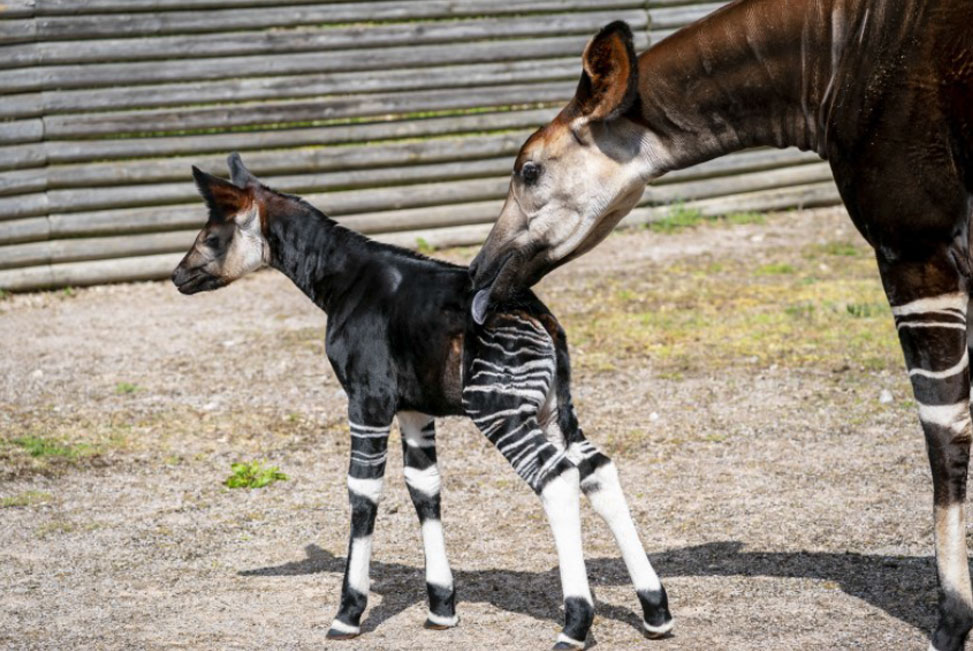 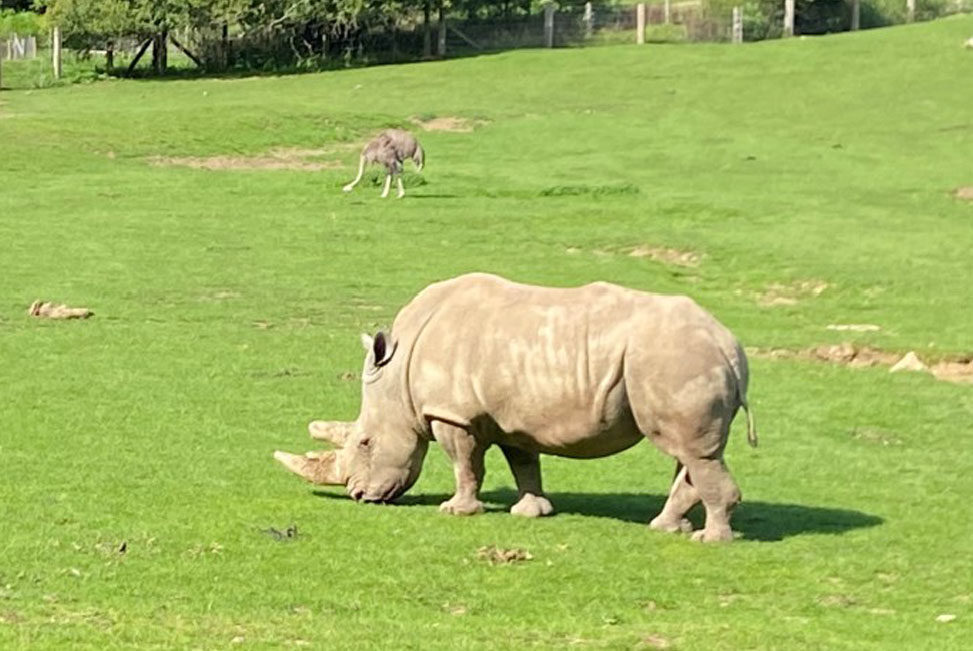 Marwell Wildlife Park is home to over 1200 animals, most of which efficiently convert the 2500 bales of feed grown on the adjacent farmland into over 700 tonnes per annum of organic matter. Marwell approached Environ to design and build a solution to use this ’zoo poo’ & straw bedding which was historically disposed off-site as a fuel to reduce their carbon footprint. Heating the buildings on site was identified as Marwell’s largest proportion of carbon emissions, so was an ideal target to help them achieve net zero. Environ’s turnkey solution is an innovative and unique use of this type of zoo poo waste material as fuel in a compliant boiler to heat the Tropical House and other buildings on the Estate. The installation is a world leading solution to reducing Marwell’s carbon footprint and operating costs. Further information of this case study is also featured in online news articles including ITV.com, bbc.co.uk, North Wales Pioneer and on Marwell Zoo's YouTube Channel
Read about Energy From Waste 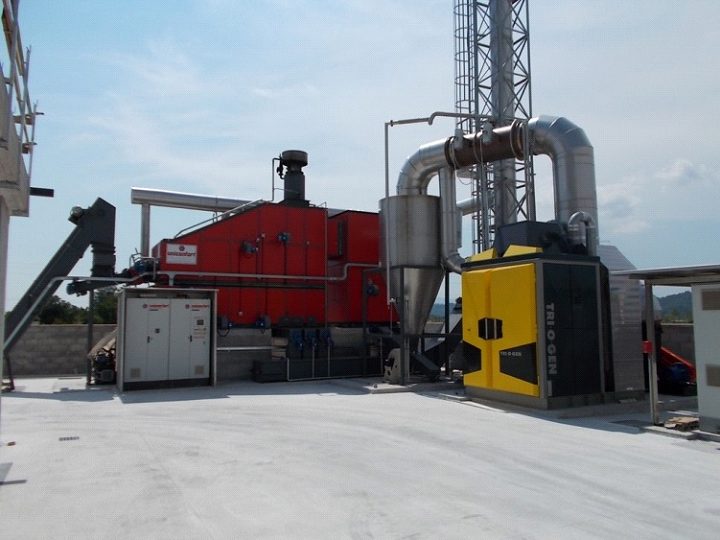 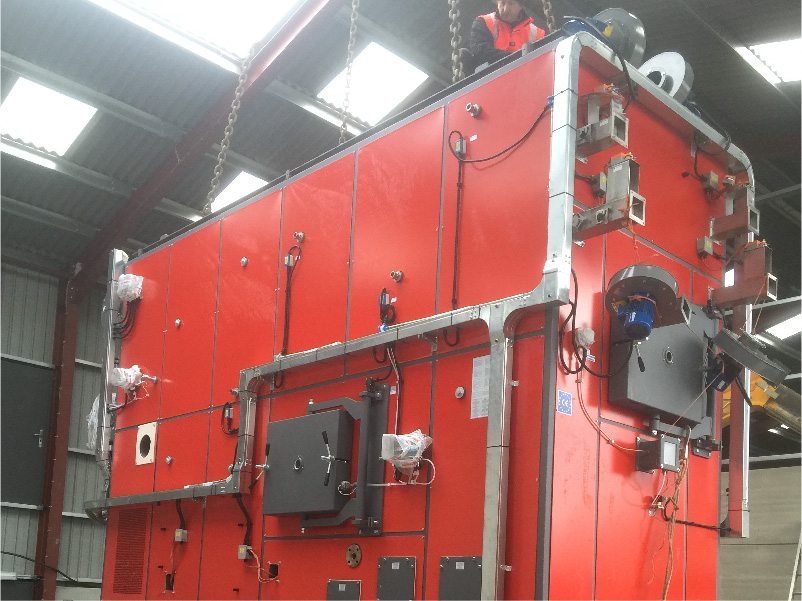 John & Michael Boyes of Strathmore Renewables Ltd approached Environ as they wished to combust virgin woodchip and utilising the resultant steam this to generate an eco friendly/paper pulp woodchip heating system – providing hot water and heating from chips normally put into landfill sites. The scope of the project was to put in a Schmidt SDK 1.6t/h steam biomass boiler to raise steam and deliver it to a steam expander Genset.

The expanded steam pass through a twin rotor set driving a generator that produces 93.05kW gross electrical power for export to the National Grid. The steam is passed to a condensing heat exchanger which in turn provides hot air for a New–Eco-Tech belt drier.

At the Daventry Biomass facility Environ has designed, manufactured and installed four waste water Draygon evaporators along with a steam distribution system and condensate recovery system which is fully RHI compliant.

The Draygon units utilise low pressure steam to power an evaporation process which separates the liquid water element from any contaminants by a process of ‘thin-film’ evaporation by controlled discharge over a steam heated exchanger thereby imparting sufficient evaporative energy from the steam to create a solid at the interface which is removed from the exchanger and deposited into a self-contained (within the evaporator) settlement tank which is periodically ‘wiped’ to remove solids resulting from natural settlement of suspended solids and solids (TDS) created by the use of the evaporation technique.

The ‘wiped’ solids are removed from the settlement tank and discharged onto a de-watering system which through the processes of natural ‘free’ drainage and mechanical pressing results in a cake solid at a nominal 50% moisture content. The dry solid is discharged by a pressing conveyor (collected) into an appropriate receptacle located at each evaporation unit and transported elsewhere for reuse.

Evaporated liquid created by the thin film evaporation process is drawn into an induced draught airstream. This airstream passes through the Draygon and over the steam heated exchanger resulting in a rise in air temperature to permit the absorption of the water vapour and is directly discharged to atmosphere. The quantity of air utilised in the process and its temperature is controlled to match the liquid evaporation rate permitting the absorption of the vapour directly into the induced airstream.

The resultant air/vapour stream is then discharged directly from the evaporator units via a dedicated stack/flue into the atmosphere. 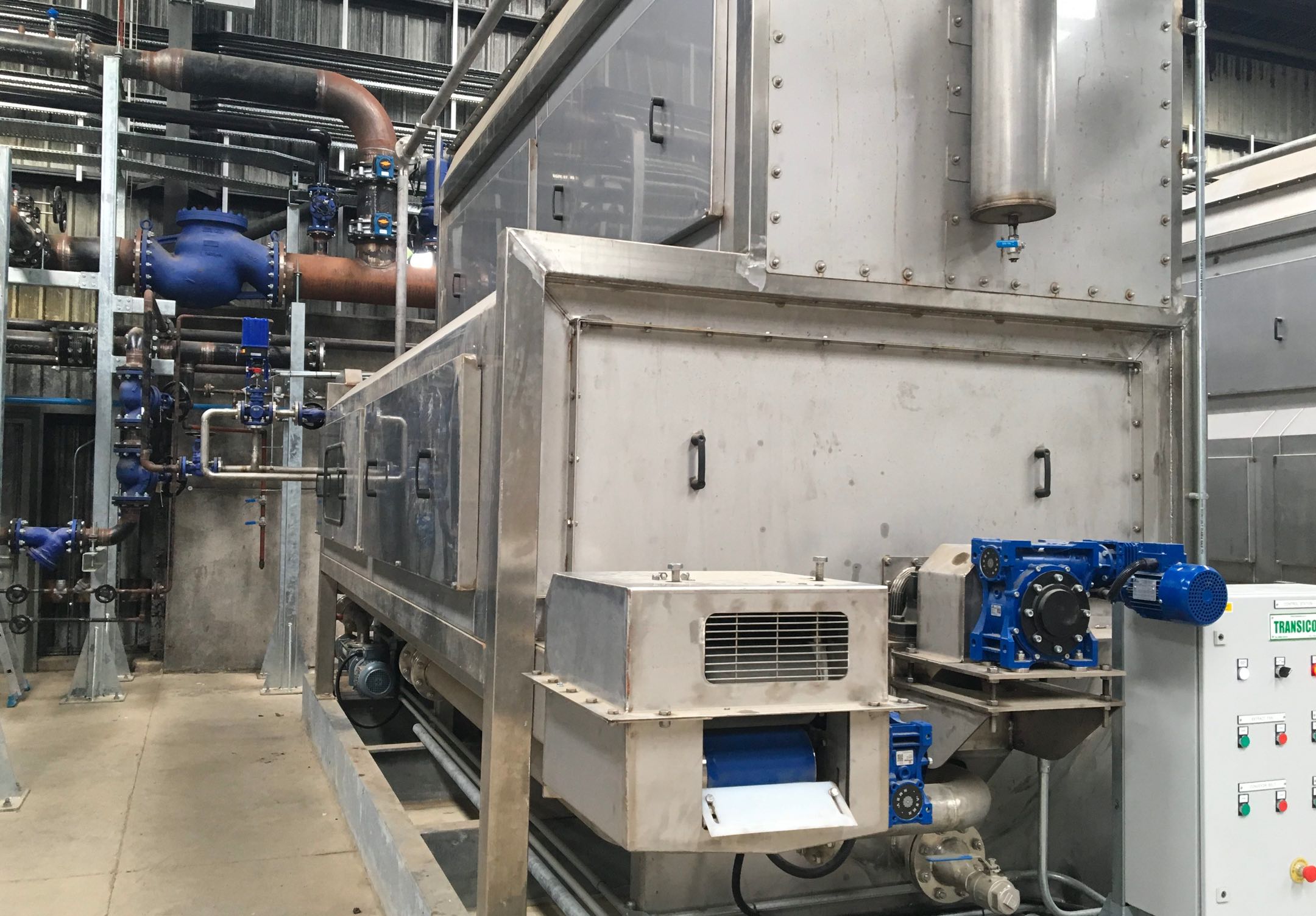